Gold has a long history of being many things to many people.  To some, it is a shiny bauble, to others a commodity, and to still others a currency.  To financial economists, gold is the traditional hedge against inflation.  This month, however, it appears to have assumed a new role: The gold market is now the mirror image of the broad equity markets. And while the tight inverse correlation in day-to-day trading is unlikely to persist for long, this general relationship may be around for quite some time.  Why?  Because headlines notwithstanding, the rapid rise in gold prices is not a short-term speculative bubble, but rather a necessary consequence of our previous bubbles and an appropriate response to the shakiness of sovereign debt. 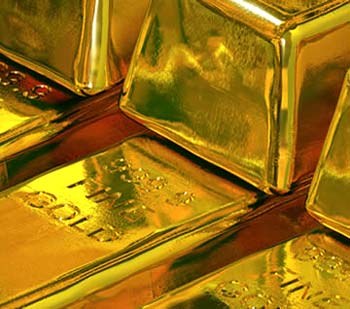 Contrary to convenient metaphor, financial bubbles do not “burst” when they end.  They unwind.  Consider the plight of the “Internet Bubble” of a decade ago.  As 1999 drew to a close, all seemed rosy in the world of dotcoms.  Christmas shopping brought droves of new consumers into the world of e-commerce, as the amount of business conducted on the Internet skyrocketed, along with e-tailer revenues.  But that revenue growth, while significant, fell far short of the amount necessary to pay outstanding bills.  In other words, folks who had relied upon future revenues to pay past bills were unable to do so.

The suddenly underfunded e-tailers, beset with disastrous balance sheets, had no choice but to defer their IPOs.  Even worse, within a few months they had to turn to their suppliers, mostly web developers and software companies, and offer them a choice: Either defer due dates on all outstanding receivables and allow them to age gracefully, or sue for collections and risk a countersuit.  With their eyes on their own IPOs, the web developers and software companies had little choice but to age their receivables—and pass the dilemma onto their own suppliers, including web hosting services and ISPs.  They too had assumed that future revenues would cover past bills, and they too were disappointed.  As month followed month, the problem flowed outward with each turn of unpaid receivables.  From software it spread to hardware and eventually to telecom.

The demise of large, well-funded companies like Global Crossing and Worldcom—roughly two years into the unwind—finally diffused the losses sufficiently for the broader economy to swallow them.  Investment picked up again, and the economy recovered—with a disproportionate share of the investment flowing into real estate.  Why real estate?  Largely because government policies arising from numerous corners and serving numerous goals made real estate investing appear to combine low risks with high rewards, and low down payments with sizable future debts.  The specific causes of the real estate bubble—like those of the Internet bubble—form a fascinating tale, but one that is tangential to understanding its unwind.  The key to both unwinds was the assumption that lager revenues tomorrow could fund today’s spending, or in a word, leverage.

In real estate, a slowdown in the rate of property appreciation made it difficult for homeowners to achieve the sorts of cash-out refinancing to which they had become accustomed.  That led to a rise in delinquencies.  The folks holding the delinquent mortgages, however, had leveraged them to the hilt, relying upon ever-increasing future revenues.  When that assumption fell flat, they too began to default, passing the problem up to their own creditors—who had likewise overleveraged themselves.  The problem spread quickly, until it landed in the lap of our largest global financial institutions, those deemed “too big to fail.”

Of course, too big to fail is a judgment call, not an existential state.  Without some form of intervention to change existing rules, all of those large institutions would have failed—too big to do so or not.  So the folks charged with setting and maintaining the rules, namely the G-20 governments, changed the rules and absorbed the losses themselves.  The problem was that while they may have absorbed these losses, they could hardly extinguish them.  The absorbing governments had to add them to their own public sector balance sheets—already heavily leveraged with promises of pensions, health care, unemployment, and other safety net benefits for an aging and increasingly idle population.

This dual leverage is now overwhelming governments from Athens to London to Washington.  Germany and the ECB stepped in to bail out Greece, only to watch the problem spread to the slightly larger economies of Ireland and Portugal, and then to the much larger ones of Spain and Italy.  The choices these governments face seem stark:  Either restructure promised benefits and risk riots, or raise taxes and reduce productive activity.   Investors and the business class, of course, would prefer the former option, but because voters typically hate tough choices and the politicians who make them, many despair that our representative governments may not be up to the challenge.

The U.S., largely alone among the major economies, has a third option: We can inflate our way out of debt.  A growing number of voices—even respected voices—are urging us to take advantage of our unique situation.  Specifically: (i) inflation is good for debtors and bad for creditors; (ii) the U.S. government is the world’s biggest debtor, and all of our debt is denominated in dollars; and (iii) the U.S. government can influence (though not actually control) the rate of dollar inflation.  Put the pieces together and it is just a matter of time before our political leaders realize that though inflation may be as anti-growth as taxation and impose greater pain on society’s needy than restructured benefits, blame for inflation is much easier to deflect on election day.

Investors around the world have begun to read the writing on the wall.  Our political leadership seems both unwilling and unable to take the steps necessary to restore growth.  Some, including President Obama, even seem unable to grasp what those steps might be–suggesting that the past year’s sovereign debt rumblings will explode into a full-blown crisis that completes the unwind.  And so the investor classes express a lack of trust in government and run from currencies; a lack of trust in business’s ability to grow in an unfavorable policy environment and run from equities; and a belief that it is only a matter of time before inflation hits in a major way.  History’s most reliable inflation hedge—gold—feels very good about now.  The flight to gold will continue even after the temporary aberration of its near-perfect negative correlation to equities has finished.

Economic Policy
We use cookies to improve the functionality and performance of this site, and to personalize ads from our company. By continuing to use this site, you are providing us to your consent to our use of cookies on the site. Please see our Privacy Policy for details.