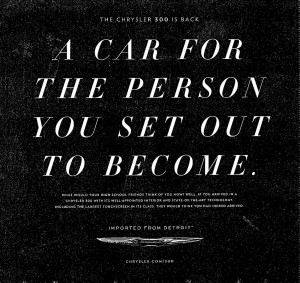 Yesterday, The Made in the USA Foundation (Foundation) filed two petitions with the Federal Trade Commission (FTC).  The petitions requested that the FTC issue complaints, one against Chrysler (here) and the other against Ford (here), both for falsely advertising that certain automobiles they manufacture are made in the U.S. when they in fact are not.

The Made in the USA Foundation is a not-for-profit organization dedicated to promoting products manufactured and assembled in the USA.  Through legislation, litigation, advocacy, and community outreach we can create US jobs and a stable, healthy economy.

Hmmm.  A stable, healthy economy based on manufacturing?  Sounds like something our country could use right about now, doesn’t it?

Ironically, when the Made in the USA Foundation was founded in 1989 Ford initially funded it!  I bet all of Ford’s cars really were manufactured here in the states back then.  Now, however, according to the Foundation’s petition, Ford is marketing its Ford Edge car as being an “American car,” implying the car was made here, when in fact it is made in Canada.  Yup.  Canada.  The complaint also alleges that Ford illegally removes country-of-origin stickers (required by the American Automobile Labeling Act) from its auto-show display cars, a practice also employed by many of its auto dealers from the cars on their lots.  Not cool, Ford!  What?  Is FORD also an acronym for Found Outsourcing & Removing Documents?  As if Fixed Or Repaired Daily wasn’t bad enough?!

Ok, so we know about Ford, now what about Chrysler?

I’d characterize this as less irony, more sneakiness.  In the ad at the top of this post, you can see Chrysler’s tagline “Imported from Detroit.”  According to the press release issued yesterday by Made in the USA Foundation’s General Counsel, Joel Joseph, the ads are “clever, but false.”  This also is stated in the Foundation’s FTC petition against Chrysler.

Chrysler began its “Imported from Detroit” TV ad campaign during the Super Bowl 2011.  The Foundation’s petition states that, “The clear and unambiguous statement meant that its cars are “Made in the United States of America.””  Worse yet, the Foundation claims that these ads are “continuing and multiplying.”  (Anyone else picturing bunnies?)  The ads are false and misleading because two of the vehicles promoted by the ads are made in Canada, and one (the Chrysler 300) often contains a Mexican-made engine.  As with Ford, the Foundation asserts that Chrysler also illegally removes country-of-origin stickers from its auto-show display cars and vehicles on its dealers’ lots.

Both petitions seek the FTC to order the automobile manufacturers to institute corrective advertising and to post prominently on all vehicles at auto shows and in showrooms the country of origin of the vehicles.  Doesn’t sound like too much to ask, and the latter is already required by law (which unfortunately could be a reason for the FTC to deny that request, although presumably it not would do so were it to substantiate that the Foundation’s claims about sticker removal).

Will these petitions, and/or action by the FTC drive the auto makers to change their marketing tactics?  Let’s hope so.

Cleverness only works if it’s honest.  Deceit is neither clever, nor cool.  In today’s age of social media, most companies — especially successful companies — can be sure consumer groups and bloggers are watching and will take them to task when their actions don’t match their words.  That, I think, is very cool.

Cloud Computing Security (for Alternative Law Firms and Others)
We use cookies to improve the functionality and performance of this site, and to personalize ads from our company. By continuing to use this site, you are providing us to your consent to our use of cookies on the site. Please see our Privacy Policy for details.