It’s no mystery that California is experiencing a water crisis.  Apparently the crisis has grown so bad that one public agency resorted to diverting internet traffic away from another.  The Central Basin Municipal Water District (CBMWD) issued a press release on September 29, 2011 stating that it was forced to file a federal trademark infringement and cybersquatting lawsuit against the Water Replenishment District of Southern California (WRD).  The complaint filed on September 13, 2011 claims that WRD registered numerous domain names, including: www.centralbasin.net; [url=http://www.central-basin.net]http://www.central-basin.net[/url] and www.centralbasinreplenishment.org, “in a bad faith effort to profit from the marks, cause reputational harm to Plaintiff and create public confusion.”  The WRD water district isn’t the only defendant whose means of competition doesn’t hold water . . .

Last Thursday, September 29, 2011, Timelines, Inc. filed a trademark infringement lawsuit against Facebook.  The complaint was filed to “protect Timelines, a small company headquartered in Chicago that has been in business for almost five years, from being rolled over and quite possibly eliminated by the unlawful action by the world’s largest and most powerful social media company, Facebook.”  Timelines.com is a website “on which users (appx 97,0000 per month) record and share events, and contribute descriptions, photos, videos, geographic locations and links.”  Timelines grew concerned when it saw the announcement on Facebook here.  Worse yet, Facebook’s new Timeline offering effectively disabled Timeline’s Facebook account, sending those searching for it to Facebook’s Timeline offering instead.  Gee Facebook, that really sucks!  It’s one thing to use a mark that’s confusingly similar to a competitor’s, especially since I’m sure you’ll claim your use is descriptive.  It’s way worse to misdirect traffic intended for a competitor’s Facebook page.  You may be the biggest website in the world, but that shouldn’t mean you get to ignore the law, even if an Illinois court recently ruled in your favor . . .

Teachbook learns the hard way just how tough it is to get a case dismissed. 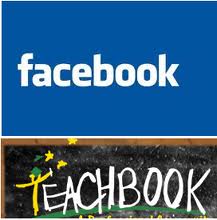 I’ve written about the Facebook v Teachbook case on a several occasions, focusing specifically on the dispute in posts found here and here.  In my June 16 post, I discussed the motion to dismiss filed by Teachbook.  Although I was rooting for Teachbook, it lost.  On September 26, Judge Marvin Aspen of the U.S. District Court for the Eastern District of Illinois handed down a 34 page opinion that taught Teachbook the intricacies of federal court motion practice at the pleading stage (something you think their counsel would have known, though apparently not).  The court “questioned the evidentiary value” of the 300 pages of documents Teachbook proffered in connection with its motion, concluding that the evidentiary value of such is subject to “reasonable dispute.”  Teachbook’s motion relied heavily on statements made by Facebook before a European trademark authority, of which Teachbook asked the court to take judicial notice.  The court declined to do at this early stage in the proceedings for of any of the evidence so requested by Teachbook, ruling that “none of Teachbook’s ten exhibits may be considered in conjunction with its motion to dismiss under Rule 12(b)(6).  The only way we could consider these exhibits at this time would be to convert Teachbook’s motion to one for summary judgment.  Given that this case involves eight separate although related claims and complex issues of law, we decline to convert Teachbook’s motion.”  Maybe the folks at Teachbook will take comfort in the fact that they’re not the only ones getting schooled in trademark law . . .

As reported by Techdirt on Thursday, Electronic Arts sued Energy Armor for trademark infringement, dilution and unfair competition in the Northern District of California.  According to the complaint, Electronic Arts’ EA brand is not only world-famous, having been around since 1982 and now offering video games and other EA branded products in more than 70 countries, but one of the most famous brands in the world, EA SPORTS having been ranked the 7th largest sports brand in the world by Forbes in 2010.  Electronic Arts has numerous US trademark registrations including for the EA logo by itself for: downloadable game software and video game software.  Electronic Arts has more than 100 million registered players worldwide, over half of which are in the United States.  It generated more than $16 billion (!!) in revenue over the past 5 years.  Some of Electronic Arts’ most famous games are its sports games, for which it has partnered with many sports leagues and associations including the NFL, NBA, NCAA, FIFA and PGA.  Energy Armor was founded in August, 2010 and primarily sells bracelets, though it also sells, or has sold, cell phone covers, pet tags, necklaces, body adhesives and watches.  It markets these products by associating them with sports and athletes, including the South Florida PGA.  Since Energy Armor refused to modify its EA logo after demands from Electronic Arts, Electronic Arts opposed Energy Armor’s trademark registration and also filed this lawsuit.  Not surprisingly, Under Armour also opposed Energy Armor’s trademark registration.  Energy Armor’s gonna need a lot more than its plastic wristbands as armor to survive these attacks.  And in news of a polka attack . . . 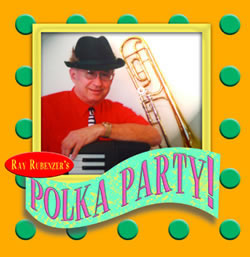 Ray Rubenzer is the dapper gentleman on the album shown immediately above.  Ray used to be married to Lois Melgaard with whom he used to perform in the musical band “Guys and Gals.”  One of the songs they performed was “Yodelin’ Boy Polka,” which was written and registered by Ray.  After Ray and Lois divorced, she married David Melgaard and became associated with David’s band, “Top Notchmen,” which performed a song called, “C’mon Sing,” the lyrics and music to which copies “Yodelin’ Boy Polka.”  Well, no more!  Hopefully Ray’s continuing to celebrate (he sure looks like he knows how to have a good time) since on September 9, 2011 his ex-wife admitted to infringing his copyright and by September 27, 2011, she paid him $25,000 for her sins.  Of course, he had to sue her first to get her stop (via World’s Shortest Complaint – kudos to Kim Peterson!), but hey, now he can dance all the way to the bank!  Meanwhile, Lady Gaga’s not dancing around Excite Worldwide’s infringement of her IP rights. 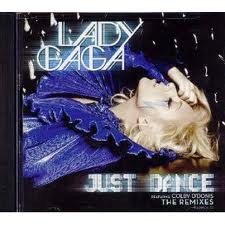 Lady Gaga, and her Ate My Heart corporation are none too excited by Excite Worldwide (site since disabled), which applied to federally register the trademarks LADY GAGA (& design) and LADY GAGA LG for jewelry and cosmetic products, respectfully, while completely disrespecting Stefani Germanotta’s rights of publicity and trademark rights.  As a result, Excite got itself sued by the singer, according to an October 4, 2011 article on American University’s Intellectual Property Brief.  Ate My Heart owns 22 LIVE USPTO records for GAGA marks, rights in which it clearly takes seriously.  If nothing else, who would want to take on a company named Ate My Heart?  I mean, I can kinda see naming your company Break My Heart, or even Crush and Destroy My Heart, but Ate My Heart. That comes from a much darker place, once most of us wouldn’t want to cross.  Sometimes, though, you have to cross Twin Peaks in order to get to Hooters . . .

Hooters recently sued La Cima Restaurants — a franchisee of the Twin Peaks restaurant chain — claiming violation of the Computer Fraud and Abuse Act, trade secret misappropriation, conversion, and tortious interference with contractual relations.  The gist of the matter is that a handful (no pun intended) of Hooters executives left Hooters this summer to join La Cima, which has since announced plans to open 35 Twin Peaks restaurants over the next 10 years.  Twin Peaks is a direct competitor of Hooters in the adult food category (yes, I made that up, but it’s apt, isn’t it?).  If Hooters substantiates its claims, La Cima’s efforts surely will fall flat.

And from the Very Demotivational website, a poster that appears to no longer be available (too bad; I’d buy one).  I’ll close this week’s Geekview with this: 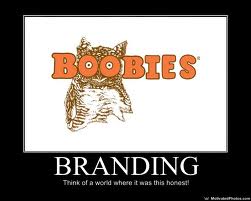