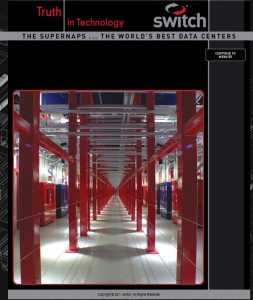 Back when the internet was still the Wild West, prospectors raced to register domain names comprised of third parties’ brands for the purpose of selling the domain name registration to the brand owner at a premium.  Congress and ICANN acted to remedy this through the Anti-Cybersquatting Piracy Act (ACPA) and Uniform Domain Name Dispute Resolution Policy (UDRP) respectively.  Somehow, some people missed that legal development, including a Canadian fellow named Dorian Banks.

Switch Communications, LLC (“Switch“) operates a group of data centers under the SWITCH brand, as it has done since 2003.  In fact, 18 of its 40 LIVE US trademark records include the word SWITCH.  According to federal cybersquatting and trademark infringement Switch lawsuit filed yesterday in the US District Court for the District of Nevada alleging that:

Since Switch commenced operations in 2003, it has continuously used SWITCH and related marks in connection with advertising and promoting its services in the United States and around the world.  The SWITCH name is well-known and well-respected in the data center industry, and has been covered by CNN Money, Vegas, Inc. the Wall Street Journal, and CNBC, among other outlets.  Switch has spent millions of dollars to advertise and promote the SWITCH marks in print, broadcast media and on the internet through the Switch website, accessible throughout the United States and around the world at <switchnap.com>. . . . In addition, Switch has made extensive use of the SWITCH marks on, among other things, the internet, direct mailings, and electronic communications.

The uniqueness of the SWITCH mark and the extensive advertising and promotion of Switch have resulted in the SWITCH name and mark being distinctive and famous for colocation facility services.

Now, if only someone could explain how such a popular technology company could end up with switchnap.com as its domain name.  It’s one thing to be asleep at the switch when selecting a mark for which appropriate domain names can be acquired, but then to publicize your mistake by including the term “nap” in your domain name?  That seems to take the principle of exposing one’s weaknesses just a little too far, don’t you think?

Apparently, Mr. Banks thought so, as he registered the domain name Switch.net on October 15, 2011 before offering to sell it to Switch for $3,700 on October 31, 2011.  Maybe he got April Fools Day and Halloween mixed up?  Otherwise, it’s hard to understand how Banks failed to foresee being sued for cybersquatting, trademark infringement, unfair competition, deceptive trade practices (under Nevada law) and intentional interference with prospective economic advantage.  Being in the technology field he really should have seen this coming.

Under the ACPA, trademark owners have a claim for cybersquatting against anyone who:

. . . with a bad faith intent to profit from the goodwill of another’s trademark, registers, traffics in, or uses a domain name that is identical to, or confusingly similar to a distinctive mark, or dilutive of a famous mark, without regard to the goods or services of the parties.

When determining bad faith a court may consider:

According to an article on Vegas, Inc. by the legendary legal reporter, Steve Green, Banks wrote to Switch and offered to sell the domain name before threatening to sell  it to someone else if Switch did not make haste in its decision.  Switch made haste alright.  Not only did it promptly sue Banks, it also filed an Application for Temporary Restraining Order and Motion for Preliminary Injunction yesterday, which the court granted today, ordering defendant Banks to immediately cease and desist all use of the <switch.net> domain name and trademarks and requiring the domain name registrar to lock the domain name and transfer it to Switch.  I bet Banks didn’t bank on that when he tried to force Switch to purchase the domain name from him.

The irony is that Switch likely paid its attorneys far in excess of the $3,700 allegedly sought by Banks for the domain name.  Now, Banks not only must transfer the domain to Switch “for free,” he also may find himself on the hook for Switch’s attorneys’ fees and other damages.

CA AG Gets Aggro Over False Claims of Bottle Biodegradability

Trademarks & Copyrights,  domain names,  ACPA,  UDRP
We use cookies to improve the functionality and performance of this site, and to personalize ads from our company. By continuing to use this site, you are providing us to your consent to our use of cookies on the site. Please see our Privacy Policy for details.