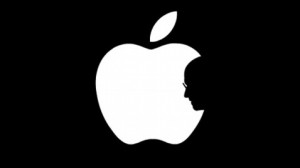 In honor, one of my tech friends, Eric Greenspan of Make It Work, posted the above image to his Facebook page yesterday afternoon, which I immediately “Liked.”  (Eric also took part in a moving HuffPost Tribute to Steve Jobs, which can be seen here).  Let me correct myself; I immediately loved this image.  It’s so simple and powerful.  It’s the perfectly beautiful human side of Apple.  It made me teary-eyed.

Of course, my left brain took over immediately and I wanted to know more about this logo from an IP standpoint — mainly who created it and why and what are they doing with it now?  The post on Eric’s Facebook page provided no clue, as it was posted initially by IGN and stated only, “Wow, whoever made this, it’s pretty awesome,” plus, I had to get back to work.  This afternoon a friend/fan told me that she saw this logo displayed on ABC World News with Diane Sawyer last night (October 6) and she sent me an article about it from Yahoo! News by Claudine Zap, on which she said some of the comments addressed the copyright ownership issues.  Now I just had to look into it.

According to Ms. Zap’s article, a 19 year old graphic design student named Jonathan Mak created and posted this take on the Apple logo to his Tumblr blog upon learning of Steve Jobs’ resignation from Apple in August, 2011.  He apparently re-posted the image on Wednesday and has since been showered with media attention, fan messages and job offers!  While Ms. Zap’s article states that Mak e-mailed Apple CEO, Tim Cook, an article on Discovery News quoted Mak as stating, “I will consider using any proceeds I make from the copyright for cancer research, as suggested by some people to me on the Internet.”

Hold on there, cowboy!  I am pretty sure Apple owns that copyright, at least under U.S. law (no idea about Chinese law, so let’s ignore those issues for now).

Ironically, the text under the image on Mak’s page states:

Posting designs like this one makes me paranoid, because I can’t shake the feeling that it’s not original.  I enjoyed the process regardless, but please let me know if somebody else beat me to the idea!

Apple may not have created your take on their logo, but I believe under U.S. Copyright law, Apple owns the image. You see, under U.S. copyright law, the “author” / copyright owner of a work has the sole & exclusive right to “prepare derivative works based upon the [original] work” (among other rights). The author can transfer such right via an assignment — a termination of the author’s rights and transfer to a third party, or via a license — a retention of rights while allowing a third party also to make some specified use of them. In other words, since Apple owns the copyright in the Apple logo, Apple also owns all modifications thereto under copyright law.  Now there is a copyright “fair use” exception to this rule, which examines:

Thus, if Mak uses his take on the logo solely as a non-profit social commentary — just as I have done in this blog post — then his use is a “fair use,” and not infringing under U.S. copyright law.  If he starts making products featuring the logo, or uses the logo to promote his design services, or if he licenses the logo out to third parties to use, then he’s undoubtedly going to find himself in hot water with Apple, and not just under copyright law.

Of Apple’s 484 LIVE USPTO trademark records, 50 include the famous Apple logo.  Thus, not only would any unauthorized use of the Apple logo or a derivative thereof infringe Apple’s copyright, use in connection with the promotion or sale of products or services also would infringe and dilute Apple’s trademarks.  Although Apple already technically owns the logo Mak created under operation of U.S. copyright law, one would hope that the folks there will see fit to compensate or at least credit him for his creativity if they decide to use the logo commercially.  Given the positive feedback the logo has garnered, I do hope Apple decides to use the logo and donate any proceeds from the image as Mak said he would: to raise funds for cancer research (better yet — for education and prevention).