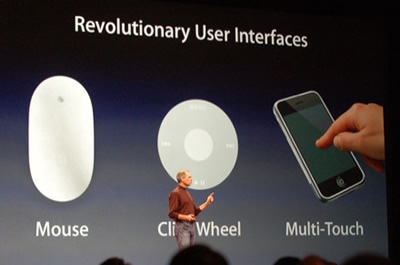 But enough about IPHONE, what about MULTI-TOUCH?  Well, Apple’s journey through the USPTO ihopes of registering MULTI-TOUCH ended on September 23, 2011 when the USPTO’s Trademark Trial and Appeal Board affirmed the refusal to register MULTI-TOUCH.

The Board began its analysis by stating that its primary reviewing court, the Federal Circuit, has stated that “the greater the degree of descriptiveness the term has, the heavier the burden to prove it has attained secondary meaning.”  The Board then devoted 6 pages of its opinion to the evidence of descriptiveness proffered by the USPTO Examining Attorney.  Even more devastating for Apple, the Board found that, “The record does not reveal that MULTI-TOUCH has been used on the goods or even on packaging for the goods.”  Thus, the Board greatly discounted Apple’s evidence of its extensive sales success of the iPhone since such evidence tended to prove brand recognition of the IPHONE mark, but not of MULTI-TOUCH.  The Board also found (and took none too kindly to the fact that),” . . . applicant makes several statements in its brief which are not supported by evidence.”

Ultimately, applicant did not submit other types of evidence which the Board typically considers in determining acquired distinctiveness.  As the Board stated:

Specifically, there are no affidavits, declarations, depositions, or other appropriate evidence showing the extent and nature of the applicant’s use of MULTI-TOUCH, advertising expenditures in connection with the use of MULTI-TOUCH, letters, or statements from the trade and/or public in the record.  We know nothing about the quantity, frequency and scope of any advertising of MULTI-TOUCH.

The Board concluded that, “simply because the applied-for term has been used in association with a highly successful product does not mean the term has acquired distinctiveness.”

C’mon Apple.  How many times have you done this before?  How could you fail to submit proper evidence?  Unless that is, such evidence doesn’t exist . . .

Descriptive terms can become trademarks upon a showing of “acquired distinctiveness” or “secondary meaning” (think brand recognition).  Sales figures are helpful in proving this, but even more important is evidence of use of the mark, “impressions” made by the mark and a demonstrable correlation between the mark and the sales figures.